A supplementation language has to be defined during language import – it can be English, German, or Japanese.

English and German are the only two languages that are complete in every SAP system. In general, any other languages are not completely translated. This means that at least some of the texts do not exist in these other languages. Since missing texts can sometimes cause processes to crash, they need to be replaced in some way. The language supplementation function in the language transport tools enables you to do this.

SAP recommends English as the supplementation language due to potential code-page restrictions.

Transaction to be used: SMLT 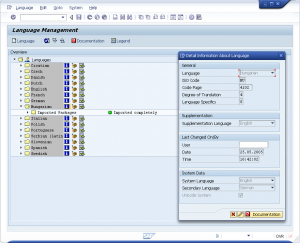