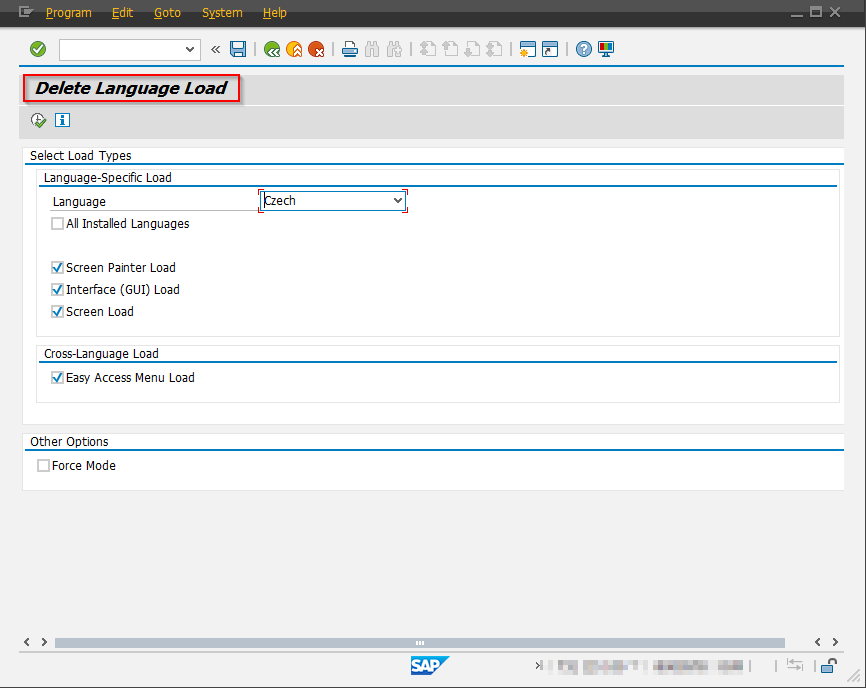 The language load must be deleted.

Language-dependent texts were imported, supplemented or deleted (for example, data element texts, screen texts, menu options and so on).
However, the outdated or deleted texts are still displayed when you display the relevant screens, menus and so on.
This occurs because only the texts were changed in the database. On the screen, however, the runtime representation (load) of the relevant objects is displayed, and this has not changed.
Usually, this problem does not occur because all language transport programs delete or invalidate the runtime representations after the texts were changed in the database so that the system automatically regenerates the load with the changed texts during the next access.
However, in rare cases, the system may incorrectly or incompletely delete the load and still display the outdated texts.

The following load types are relevant for the language transport.

This table buffers texts from the ABAP Dictionary.

To explicitly delete the runtime representations, proceed as follows:

First, import the transport request SAPKL31H05 from the directory ~ftp/general/R3server/language/del_load from sapserv. For more information about importing, see Note 13719.

Then execute the report RSLANG20 in the background.

Change due to Basis Support Package #25(46B), #15(46C) or #6(46D): The language-independent part of the screen load is deleted only if the parameter “FORCE” is set; the buffered entries in the Easy Access Menu are automatically invalidated. The postprocessing steps mentioned below should no longer be required.

You can use the selection screen to select the load types that must be reset. For more information, see the system documentation for this report.

In various database systems (DB2, DB6, MSSQL, INF), you may not be able to successfully delete the screen load. This is corrected with Basis Support Package #9 (SAPKB61009).

If you use application servers with different hardware architectures, refer to Note 497561. Otherwise, you must start RSLANG20 on each application server to completely delete the CUA load. This is corrected with Basis Support Package #14 (SAPKB61014).Postprocessing

After the report is completed, you must reset the CUA buffers and the screen buffers on the individual application servers to reload the buffered menu representations and screen representations.
To do this, call transaction SM51 and navigate to each listed application server by double-clicking it. Subsequently, enter the command “/$CUA” in the OK code field for the relevant server to reset the CUA buffer of this server. Then, enter “/$DYN” to empty the screen buffer. For more information, also see Note 26171.
As of Support Package #40 (4.5B) or Basis Support Package #25 (4.6B), #15 (4.6C) or #6 (4.6D), the CUA buffer is automatically emptied on all application servers.

This is required for Releases 4.6 and 6.1.
The report BALVBUFDEL resets the buffered data. Please read SAP Note 339258 before using the report.

In systems with Release 4.6x and kernel 4.6D, Patch Level <600, problems can occur during screen generation (SAP Note 363394). Due to these problems, German texts may be displayed on the screen, even if translations are available in the system. If the execution of the report RSLANG20 does not solve this problem, import the most current kernel for the system.

Links to this document: